In January 2021 I started playing chess. All I knew back then was how to set up the chess board and how to move the pieces. I’ve played many games in the last year and a half and I’ve improved. There’s a pretty good way to measure how much you’ve improved, but more about that later.

Chess is a great game. It’s easy to learn the basics. You don’t need much equipment. You can draw the board and the pieces on paper, in the case of an emergency. You can play it with kids, but it will take you a lifetime to get good at it.

There are many resources for learning chess. From books to videos, from playing with friends on an old wooden board to playing with strangers online. I won’t cover all of those in this post, I’ll focus on things that I’ve used myself.

Like anything in life, you’ll need motivation to learn chess. It’s just one of the things you could do in a day. There are many alternatives. Your motivation might be to spend your leisure time more wisely than watching TV or browsing social networks. It might be some quality time with family or friends. Maybe even just improving in a challenging mental activity. It’s probably even more silly than it sounds, but my motivation is (at least partly) good old sibling rivalry. I just want to beat my brother in a game of chess.

Whatever the motivation, if you don’t have one, you’ll probably give up pretty soon.

It’s easy to learn the basics of chess, but it’s a game that’s hard to master. It will probably take you a lifetime. Don’t get discouraged by that. It’s a fun game and you can pace learning to your taste. You don’t need to learn everything at once. Every little piece of chess knowledge you pick up will help you in the next game.

You will have to learn the names of various pieces (from pawn to king), how to play with them and how valuable they are. That was one thing that surprised me when I started learning more about chess. Each piece has a value. If you know chess basics, you’ll intuitively know that a queen is more valuable than a pawn. But how much? More about that later.

You will have to learn how to set up the board, its coordinates (from a1 to h8) and chess notation (example: Bxd2+).

You will learn openings, middlegames and endgames. Openings may get the worst reputation. Isn’t it just a lot of moves with fancy names (like Bogo-Indian Defense) that you have to learn by heart? That doesn’t sound fun at all. For at least the first year or two you probably don’t need to learn any of those. You do need to learn the principles of openings, but not any of the openings.

Finally, you will have to learn tactics (short term) and strategies (long term).

Now that I’ve covered all of the things that you should (eventually) learn, how do you actually learn? There are so many options. A list would be too long and boring to read. I’ll just focus on things that worked for me.

I’ve tried a few things, but I spend the vast majority of my chess time on chess.com. There are good alternatives (like lichess.org) but I just haven’t spent enough time with them to have an informed opinion. Of course, playing with a real physical board with family and friends might be the best thing, but it might be hard to organize.

“A lesson a day keeps the losing away.” (My attempt at a chess proverb.)

Everything I know about chess I’ve learned by watching chess.com lessons and doing the exercises. Every lesson is a few minute long video with a few exercises. You should be able to finish a lesson in 5-10 minutes. I’ve done all the exercises two times (from start to finish) and I’m doing the third round now. That’s how much I think they are useful.

Puzzles are another great way to learn. You are presented with a chess board usually in the middle of a game and you have to find the best move. Each puzzle will take you from a few seconds to a few minutes. It’s great for practicing positions that will happen in real games. It’s also a great alternative to checking social networks when you need a break.

“Everybody has a plan until they get punched in the face.” ― Mike Tyson

All the lessons and all the puzzles will not make you a good chess player unless you actually play the game. There are plenty of options. Most of the games are timed. You can pick very short games like bullet (1-2 minutes per player for the entire game) and blitz (3-5 minutes per player). Those are great for practicing openings. You can pick a more relaxed rapid game (10 and more minutes per player). My favorite is daily, where you usually have 24 hours for each move. That time scale is great if you want to study the position more carefully, or if you don’t like to play under time pressure.

After you finish a game, it’s very important to run computer analysis on the game. That’s a great way to learn. Computer will let you know which of your (and opponent’s) moves were good and which were bad, with suggestions on how to improve. The longer the game, the more I get out of analysis.

For example, I’ve played a lot of bullet games (2 minutes per player). You can learn something by analyzing those games, but the vast majority of the mistakes in such short games happen because you didn’t have enough time to think. So, analysis doesn’t helps somewhat, but not much.

I’ve also played a lot of daily games (24 hours for every move). I usually think 5-10 minutes about each move and consider a few alternatives. So, when I look at the analysis after the game, I can see which alternatives I’ve missed. The next time I’m in a similar situation, I remember the analysis and usually play the correct move.

Both. Depending on your motivation and preference you might do more practice or play, but if you want to improve, you have to do both. 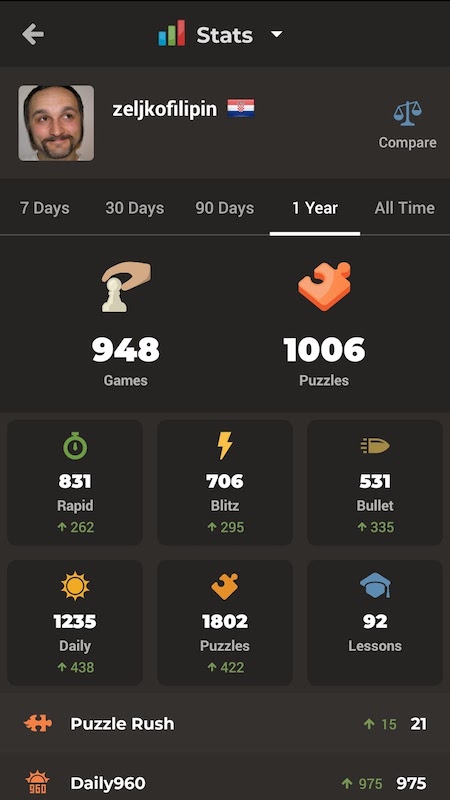 It isn’t displayed on this screen, but you can also compare your rating to the rating of active players in the last 90 days.

So, if I understand my rating compared to other people correctly: