Dragon Chicken says: "Once upon a time a knight that knew only record-playback came to fight me. It was a lot of fun." 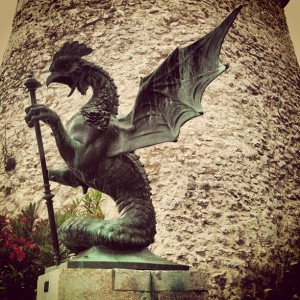 Dragon Chicken. Based on a true story. (Rijeka, Croatia.)

This morning an idea came to my mind. The disagreement that Selenium and Watir communities have about recorders is similar to the one that conservatives and liberals have about condoms. Conservatives say "no sex before marriage". That is the best prevention for teenage pregnancy and sexually transmissible infections. Liberals say "boys will be boys", they will have sex anyway, no matter what we say, so we should encourage them to use condoms, to prevent pregnancy and infections.

Selenium and Watir communities pretty much value the same things. Both think that "real men drive real browsers". The communities were never closer. Watir-webdriver gem (part of Watir project) is using Webdriver (part of Selenium project) to drive browsers. Last year, the majority of the Watir team and a lot of people from the Watir community were at the Selenium Conference. Rainbows and unicorns. Almost.

There is one thing that we disagree on. A minor thing, but still important. Recorders. Selenium community says: "test automation is hard". We should help people to get started. After they see how easy it is with a recorder, they will learn teh codez and do it The Right Way. Watir community says: "test automation is hard". People do not need training wheels. We should teach them how do to teh codez The Right Way from the start.

Selenium has a recorder. As far as I know, they had it almost from the beginning of the project. They think it is more good than harm. They are proud how popular it is.

There was never an official recorder for Watir. Watir community thinks they are more harm than good. Even more, when somebody makes a recorder for Watir (and it has happened a few times), the Watir community actively discourages it's use. Bret, co-founder of the Watir project, had a keynote talk at Selenium Conference last year. The majority of the talk was about recorders. Not in a nice way. There is also Record! Playback? #Fail site. I do not know if it was ever confirmed, but I am pretty sure that it is created by a member of the Watir team.

I am not trying to say here that I think either the conservatives or the liberals, Selenium or Watir community is right, and the other one is wrong. If you know me, you know what I think about both topics. It was just an interesting thought and I wanted to share it. I am looking forward to comments.