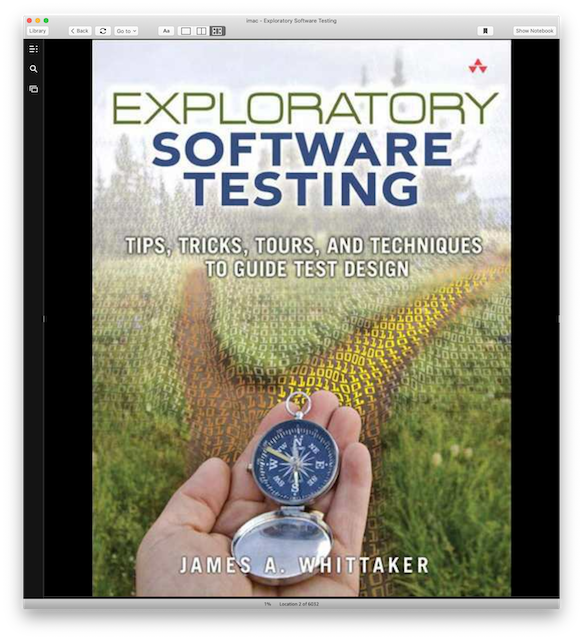 Tourism benefits from a mix of structure and freedom, and so does exploratory testing. (p. 42) The industry’s approach to manual testing has been either to overprepare by writing scripts, scenarios, and plans in advance or underprepare by simply proceeding in an ad hoc manner. Exploratory testing with tours is a good middle ground. (pp. 121-122)

This is the fourth book that my team at work is reading for our book club. All books we’ve read so far were on software testing. We were reading this book from May to July 2022. We’ve had two book club meetings to discuss the book.

As it usually goes 🙄 I’ve finished reading this book in June but I didn’t have the time to write the review then. I was on vacation for a few weeks in August so writing the review got further delayed. I think it’s way past the last responsible moment to write the review, but better now than even later.

After a very successful tech career, the author is now an investor/owner of a brewery.

I won’t summarize all chapters, but a few of them stood out.

Chapter 6 (Exploratory Testing in Practice) is interesting because it provides viewpoints from different people, teams and products. But, it’s also mediocre.

Chapter 7 (Touring and Testing’s Primary Pain Points) is one of the most interesting chapters of the book. I don’t remember any other serious discussion about these serious problems that testing has.

Chapter 8 (The Future of Software Testing) offers very interesting thoughts on the future. I don’t remember reading about the future anywhere else.

When I first scanned the book, I thought appendices were there just to make the book bigger. I was pleasantly surprised while reading them. There are three of them. The first one is Building a Successful Career in Testing and the second and the third one are a selection of author’s blog posts. Both are worth reading. I have more notes from appendices than from the book.

I have written down many many quotes from the book. Here are a few of them, with my comments.

“Any sufficiently advanced bug is indistinguishable from a feature.” Rich Kulawiec (p. 21).

A funny variation of: “Any sufficiently advanced technology is indistinguishable from magic.” Arthur C. Clarke

Imagine trying to predict the winner of the Super Bowl or Premier League before the season begins. (pp. 37-38)

A beautiful example of the impossibility of planning all testing in advance.

A funny variation of: “one man’s meat is another man’s poison”.

These are some number of bugs that simply cannot be found until the house is lived in, and software is no different. (p. 119)

Anyone who thinks they can learn testing in a single day is a fool who has no business testing software. (p. 152).

I guess it’s the same for other things, chess for example. You can learn the basics in a day, but it will take you a lifetime to master it.

Certainly, I’ll agree that, like artists, software testers need to be creative, but art implies skill without training. Most virtuoso artists were born to the task, and those of us unlucky enough to have no artistic talent are unlikely to develop such skill despite a lifetime of practice. (p. 157)

I think this is completely wrong. Art requires a lot of training. I don’t think any virtuoso was born with it. Some people have more talent than others, but if you don’t train, your talent is wasted.

The above two quotes are from Software Testing as an Art, a Craft and a Discipline blog post. This is one of the most interesting chapters of the book. The difference between craft (learn on the job) and discipline (learn by deliberate training) is an eye opening insight.

TIL pharming is a cyberattack intended to redirect a website’s traffic to another, fake site by installing a malicious program on the computer.

Software tester wanted. Position requires comparing an insanely complicated, poorly documented product to a nonexistent or woefully incomplete specification. Help from original developers will be minimal and given grudgingly. Product will be used in environments that vary widely with multiple users, multiple platforms, multiple languages, and other such impossibilities yet unknown but just as important. We’re not quite sure what it means, but security and privacy are paramount and post release failures are unacceptable and could cause us to go out of business. (p. 200)