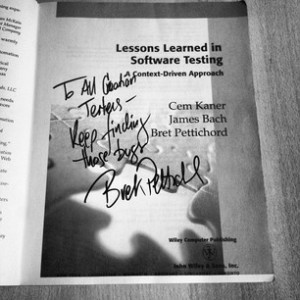 A few days ago I have finished reading Lessons Learned in Software Testing by Cem Kaner, James Bach and Bret Pettichord.

I have been reading it for months, in small sips, as suggested in foreword. It has traveled with me to Mexico, Texas and back to Croatia. If you did not read the book, I would highly recommend it. The book has almost 300 lessons that are grouped in several chapters. The most interesting chapters for me were Automating Testing and Your Career in Software Testing.

I am always struggling with notes, but I think I am slowly improving. While I was in school, one of my literature teachers said that a book that you did not write anything about is a book that you did not read. Since my memory is pretty bad, that is literally the truth for me. For this book I have just written down the number of the lesson that was really interesting. I did not do a good job of that in the first half of the book, I guess because I was traveling, but I have notes for the second part. I have also highlighted a few lessons that were particularly interesting.

I will mention a few lessons by name and write a few sentences about it. I have written down numbers of 17 lessons, but I do not have the time to write about all of them, so I will pick just a few.

From chapter 8: Managing the Testing Project

189: There is no right ratio of testers to other developers

I have often heard people talking about tester/developer ratio. It is just a number. It means different things in different contexts.

From chapter 10: Your Career in Software Testing

251: Conferences are for conferring

If you follow my blog, you have surely noticed that I try to attend as many local and international conferences and meetups as possible. I have learned a lot of stuff in official parts of the conference, and met a lot of nice people in unofficial parts, mostly over a beer.

252: Lots of other companies are as screwed up as yours

Literally today in an e-mail exchange a colleague said "there is a lot of chaos in my company". My reply was that, from my experience, CDD (chaos driven development) is the most popular software development methodology. You can officially call it whatever you like.

The choice of this lesson could be strange having in mind that for the last few years I earn my living by writing Ruby, but the point of the lesson was not to learn Perl, but any scripting language. I could not agree more. When you learn a scripting language you gain superpowers that you did not even know about. True story.

In case it is not obvious, I am doing it right now. Please note that I am also doing it in a foreign language. Not an easy thing, trust me.

I am often speaking at local and international conferences and meetups. I have had pretty bad talks, but also pretty good ones. I like to think I am improving.

272: If you can get a black belt in only two weeks, avoid fights

This lesson is about certifications. If you can get a certification after learning a few days or weeks, do not be surprised if nobody values it. There is a reason people go to school for years.